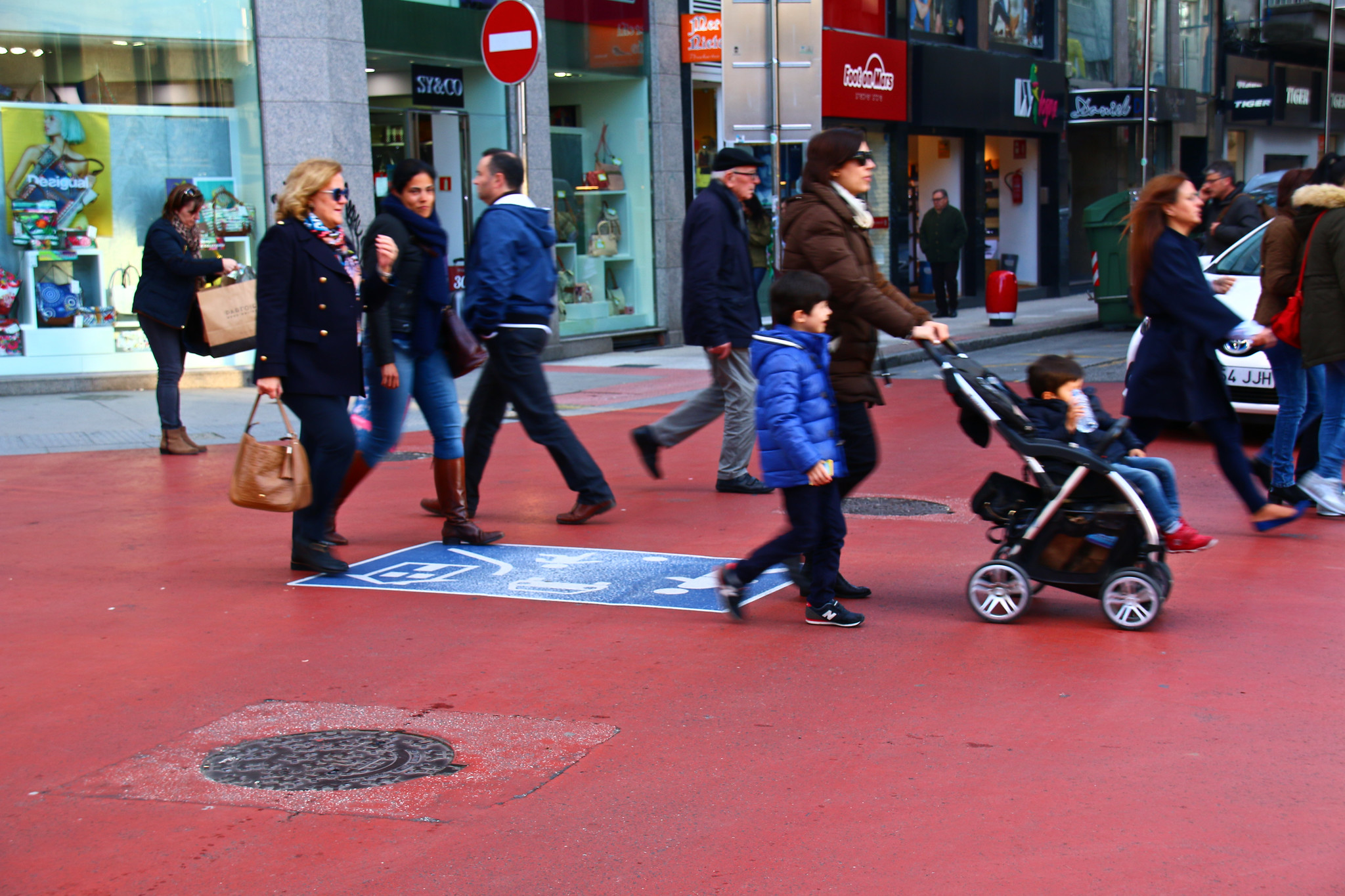 When it comes to retail, most cities tend to have policies that encourage large companies and retailers to locate there. If this is the key to economic success, what happens to a city that prioritises space and resources for its local businesses? Let's take a look at Pontevedra's success story of putting small local businesses first in anticipation of Placemaking Week Europe 2022.

Pontevedra’s urban strategy focuses on access to public space and its positive impact on residents’ quality of life, making it a global “best case” example. This approach is closely related to the way the municipality prioritises small, local retail and hospitality businesses, and explains why this city of 84,000 people has voluntarily eschewed shopping centres. Here are three key aspects to understand how this model has proven a success:

1. A history of urbanism and local entrepreneurship

As Pontevedra is mainly a mixed-use city, the historic and commercially relevant city centre is also the area with the highest density of population and activity. Benito Corbal, one of the main commercial arteries, is the street with the most public works and beautification projects in recent decades. Creating a city for residents as people, rather than residents as consumers, has had a positive impact on the economy of the historic city centre where Benito Corbal is located.

Benito Corbal himself was a builder, developer, politician and entrepreneur in the late 19th century, whose greatest and most famous work is the construction of most of the modern buildings in the street that bears his name. Its rapid development compared to other parts of the city made it the most important commercial centre of Pontevedra. 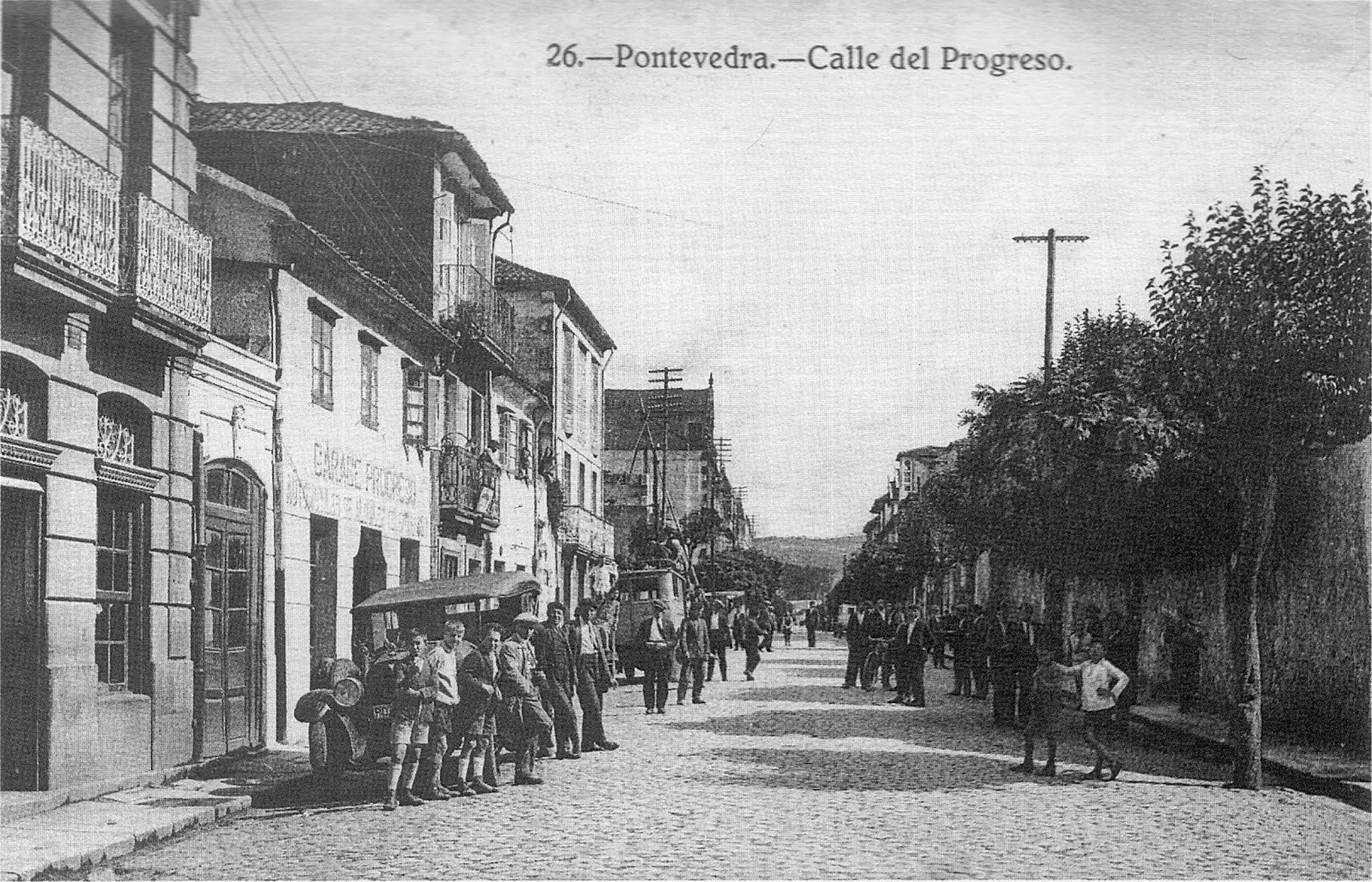 Benito Corbal street circa 1924, Kallmeyer & Gautier
During the 20th century, Benito Corbal was the epicentre of the “one-minute city” with restaurants, theatres, a cinema, a hotel, a driving school, nightclubs, retail, grocery shops, a hospital and even a petrol station - all on the same street or very close by. Today, it's still one of the most popular destinations for locals and one of the few places where you can shop at a multinational chain shop. 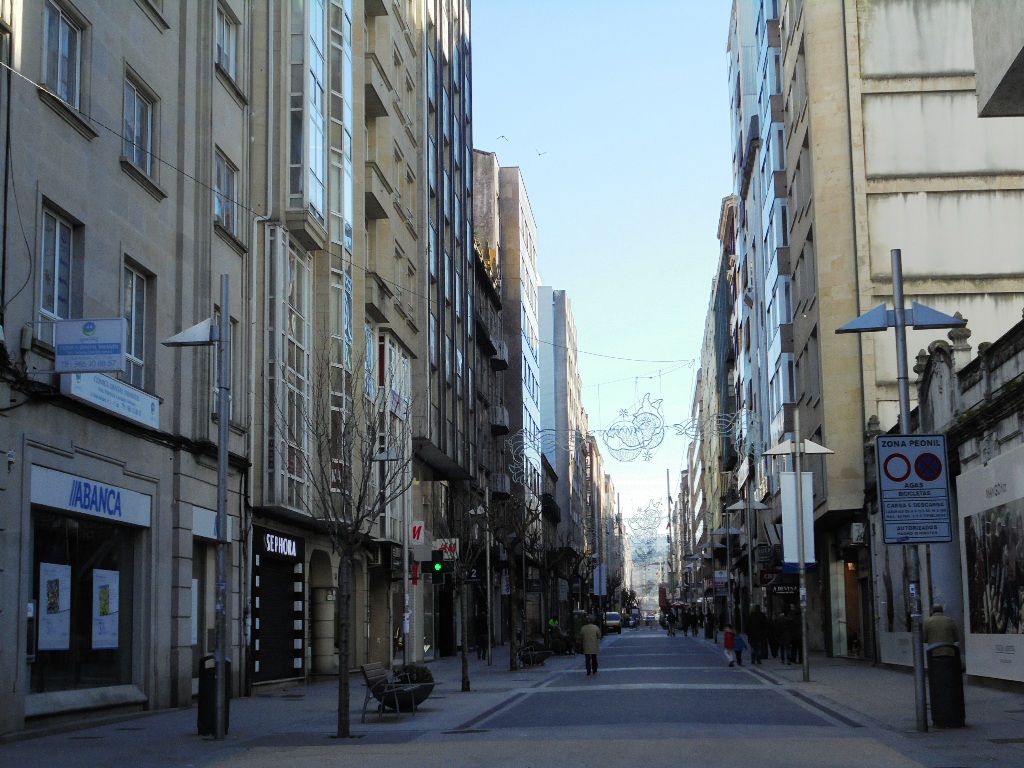 A pedestrianised Benito Corbal in 2015, Wikimedia Commons
2. Busting the myth of door-to-door parking

Benito Corbal and the rest of Pontevedra’s city centre represent the city’s urbanism model, Modelo de Cidade, which took early measures to calm traffic, widen pavements and remove parking spaces. The street was declared a pedestrian zone in 2013 and business in the area increased. This inspired business associations in other streets where traffic was to be diverted (Cruz Gallástegui and Castelao) to also demand pedestrianisation. Overall, the municipality has proven right that the total number of cars that are needed for the city to function properly is far lower than people think.

The historic centre of Pontevedra was closed to traffic in August 1999, when the current mayor of Pontevedra, Miguel Anxo Fernández Lores, assumed his position. This was the end of decades of residents using the area as a transit station to get to other places or to permanently park their cars in free, convenient spaces. But if the city centre was to become a great place to live, work and play, public space had to be reclaimed for people. In 1999, 70% of public space belonged to cars and the rest to pedestrians. Today it is the other way round: 70% for those who walk or cycle and the rest for cars.

There are 3,500 free parking spaces available for non-residents throughout the city centre perimeter, making it convenient for shoppers and visitors to the area to park and walk 10 to 15 minutes to their inner ring road destination. Those who want even more convenience can use the paid parking spaces in the centre, which run promotions in cooperation with the municipality offering free time or discounts to shoppers. Loading and unloading is still allowed in the area, so commercial activities and daily tasks were not really disturbed. 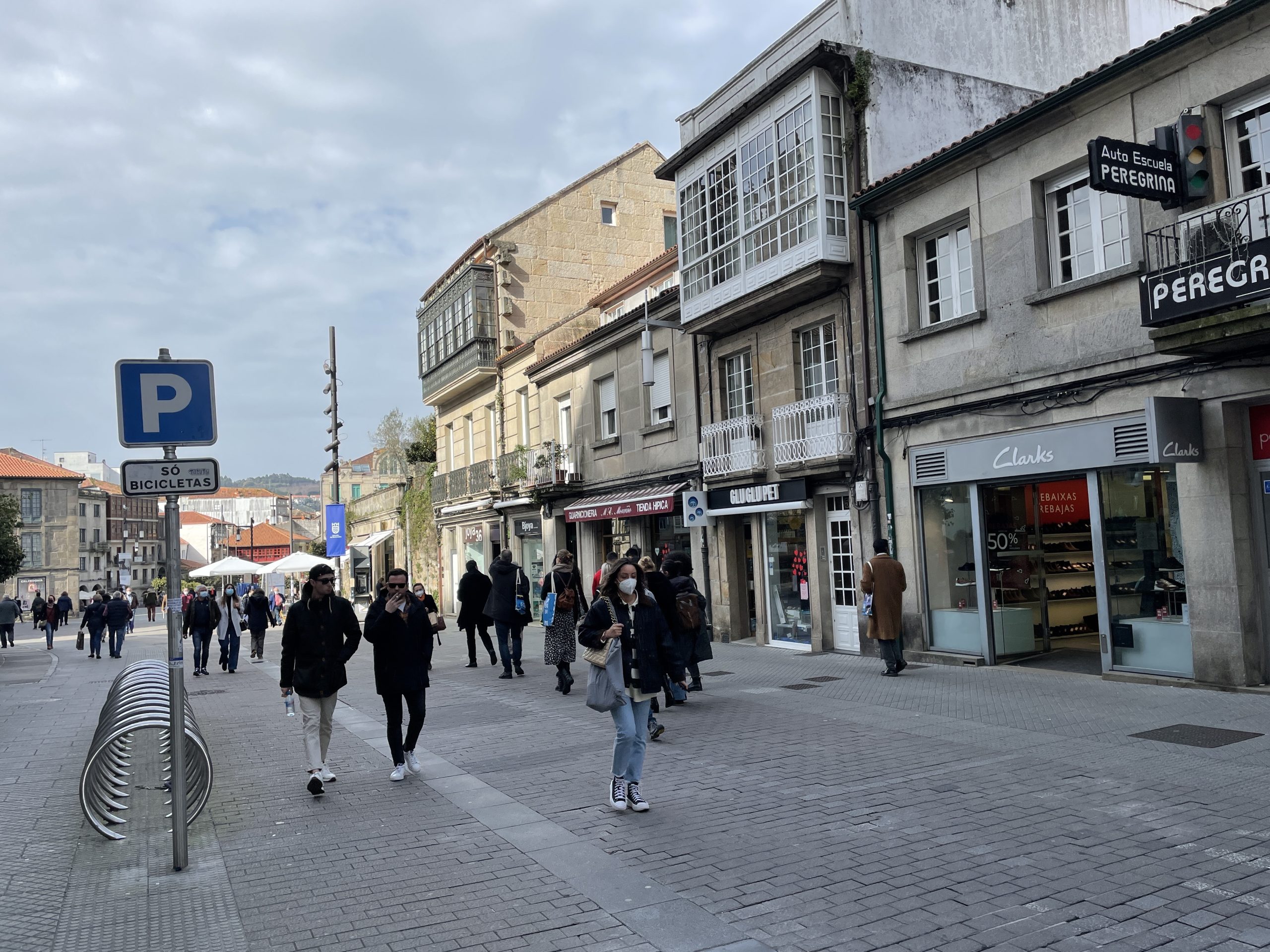 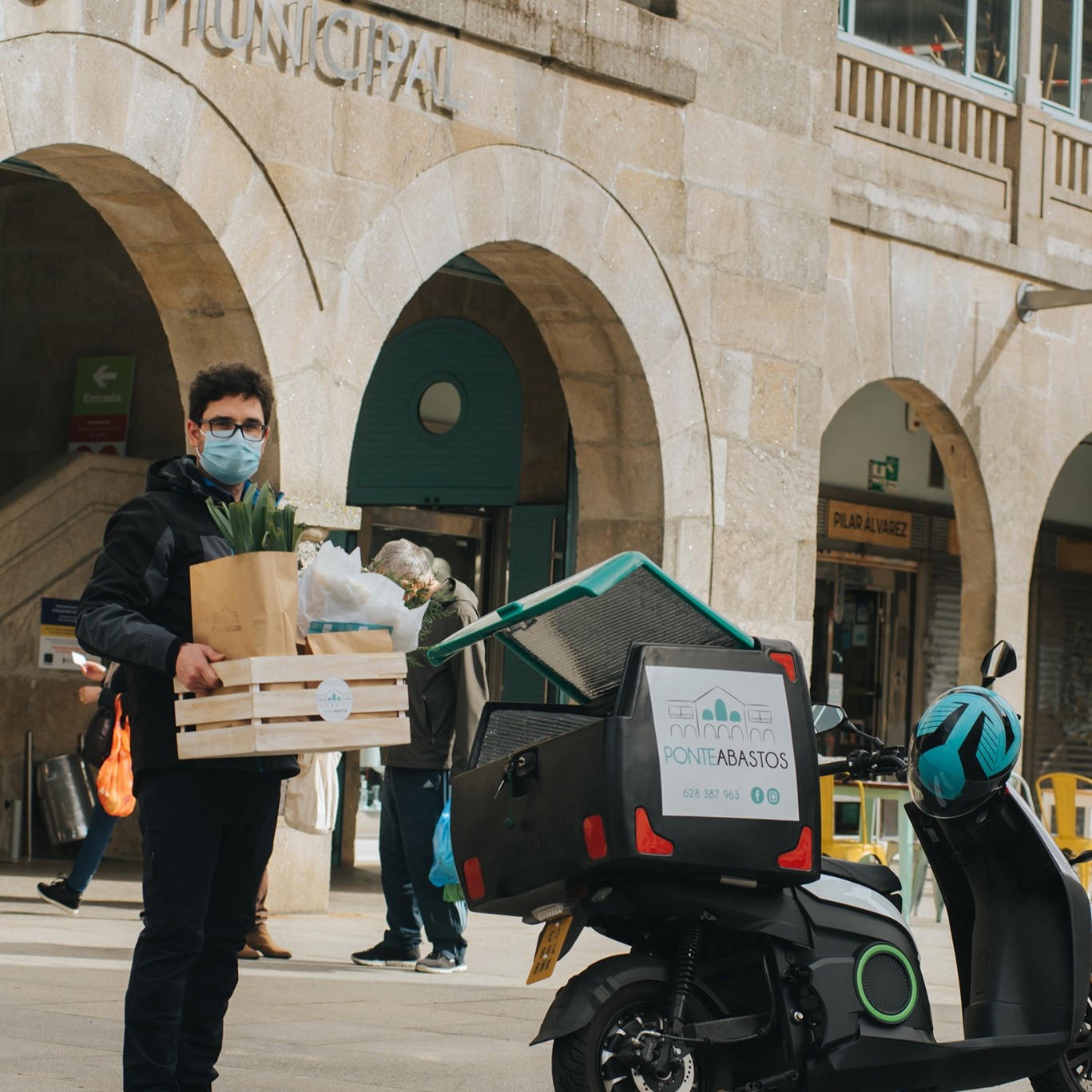 The municipality has a clear stance on its planning model and encourages shopping small, local and slow. The current mayor has even opposed the development of shopping centres in the inner ring road or elsewhere in the city, as this is contrary to the Modelo de Cidade, where access to public space is a basic human right. The only department store/shopping centre within Pontevedra city limits is one of the smallest in Galicia and is located in the high-speed train station, which is already on the outskirts of the city.

Pontevedra’s bold policy move has been positively received by local business owners and residents over the years, as otherwise the small businesses and shops that thrive in the city centre would have been impoverished. In fact, this has expanded the mentality of shopping nearby, especially in pedestrianised areas. A survey showed that 91.5% of city centre residents prefer to shop within walking distance of their homes. Less than 5% of inner ring residents use their car to buy groceries, clothes or gifts, and among those who do, outer ring or suburban shopping centres are the least preferred option.

This type of policy has also benefited from the fact that there is a strong alliance of independent business owners who are willing to work with the municipality to attract and retain customers. #Pontelovers is an alliance between the municipality and associations of service providers, retailers and restaurateurs that was launched during the 2020 closures to promote local consumption and is still actively campaigning and doing activities on Facebook and in local shops. They have also launched e-ponte.com, a platform to promote online booking of local services and online shopping to pick-up at local stores. 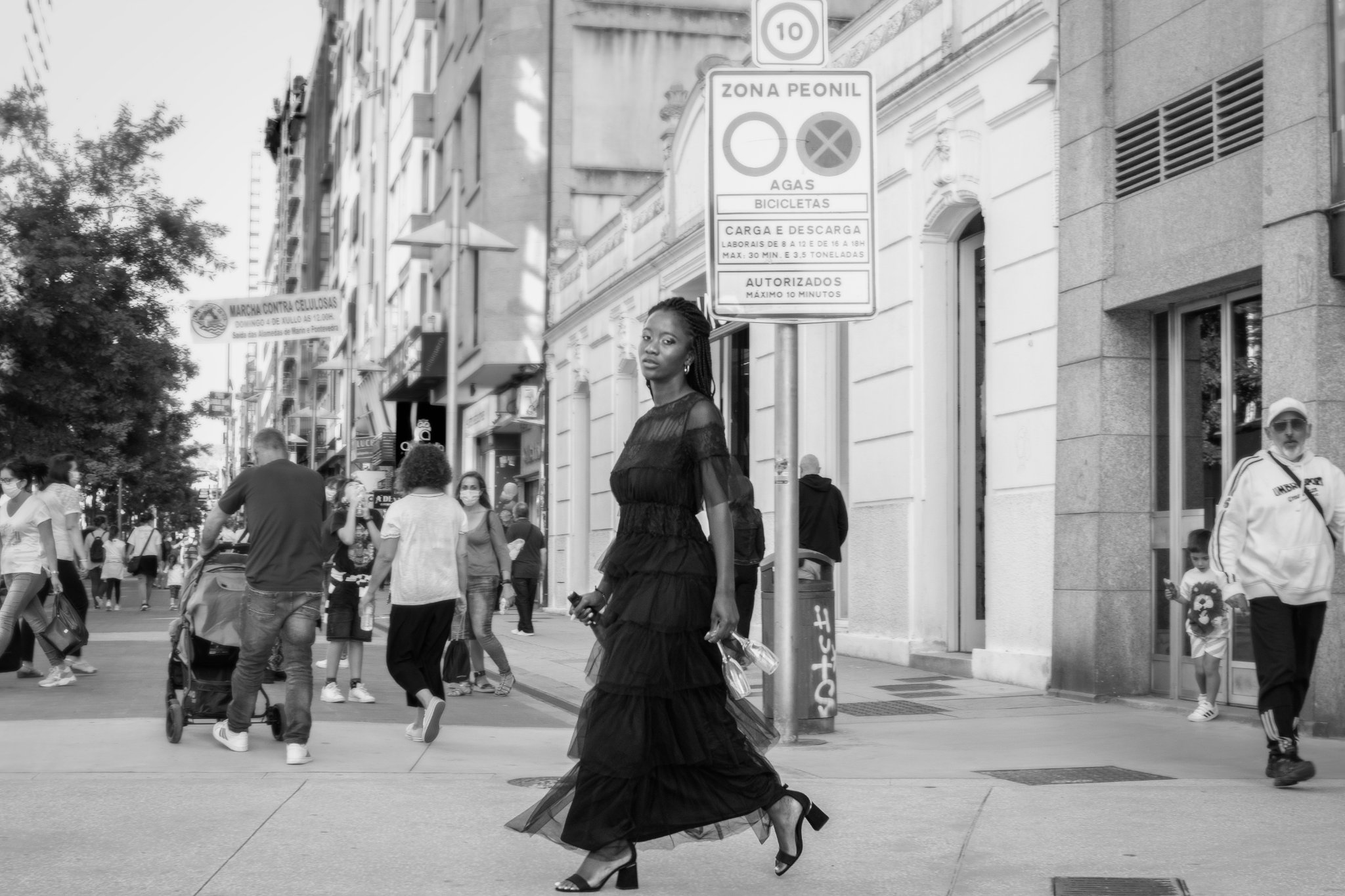 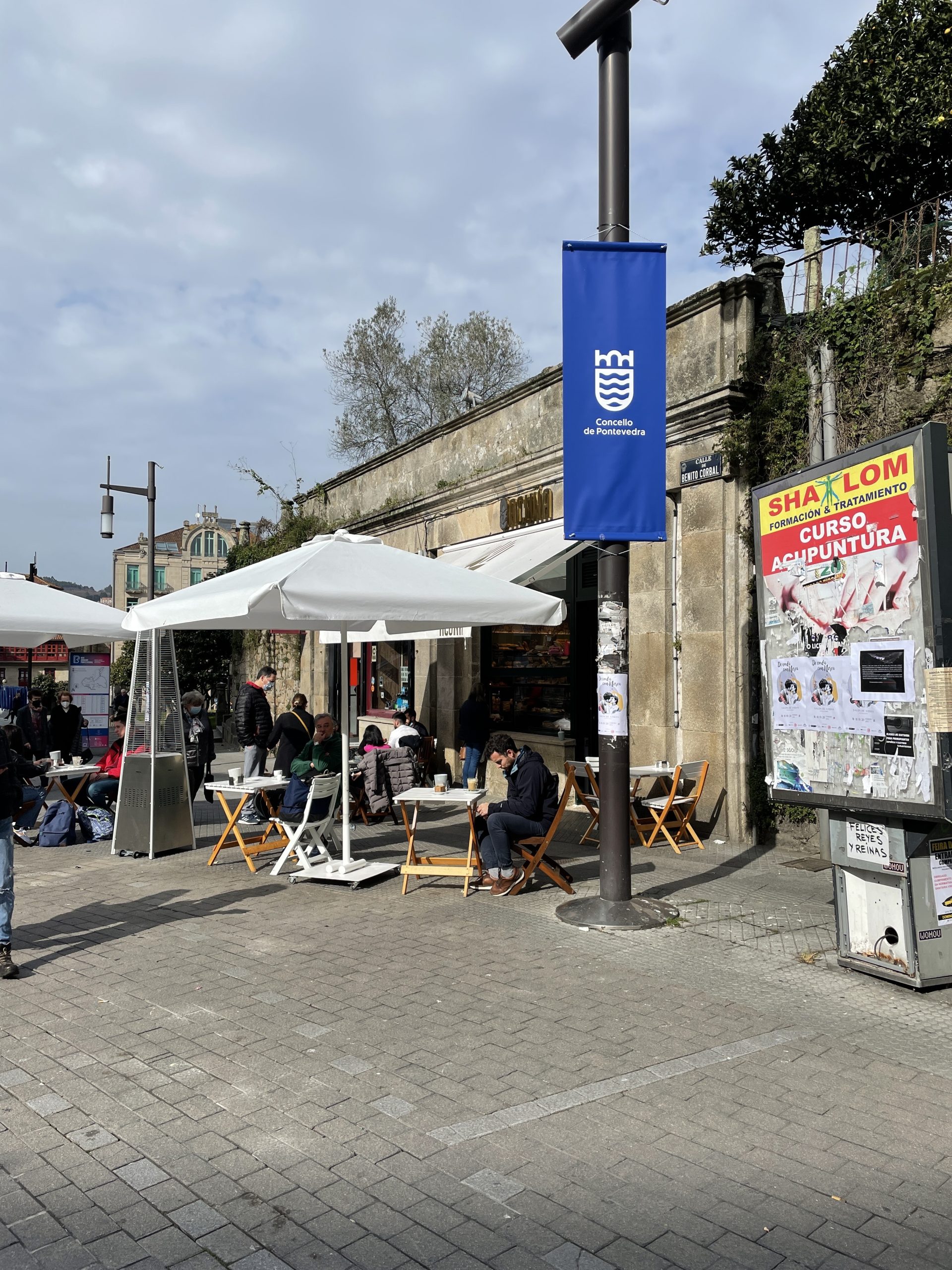 A terrace in Benito Corbal, Placemaking Europe
Pontevedra's approach has proven to be a sustainable model for local business in a world of globalisation, where large multinational chains are capturing a larger market share every year and e-commerce is taking over.

The municipality has launched a number of initiatives since the pandemic aimed at local businesses and their customers, including sustainable window dressing and Christmas window dressing competitions, a public space fashion shoot featuring clothes from independent shops that was featured in Vogue, live hairdressing shows on the street or a competition for the best brunch in Pontevedra, to name a few.

Overall, Pontevedra’s creative and bold approach to improving quality of life and access to public space has also helped small businesses. Its city centre placemaking strategies have prevented the economic decline caused by shopping centre decay, and it shows the world that an alliance of many small businesses can resist pressure from retail giants. More cities could harness these insights and use them to their own advantage, as we will see during Placemaking Week Europe 2022 in Pontevedra, which will take place from 27 to 30 September 2022.

Get your tickets here! 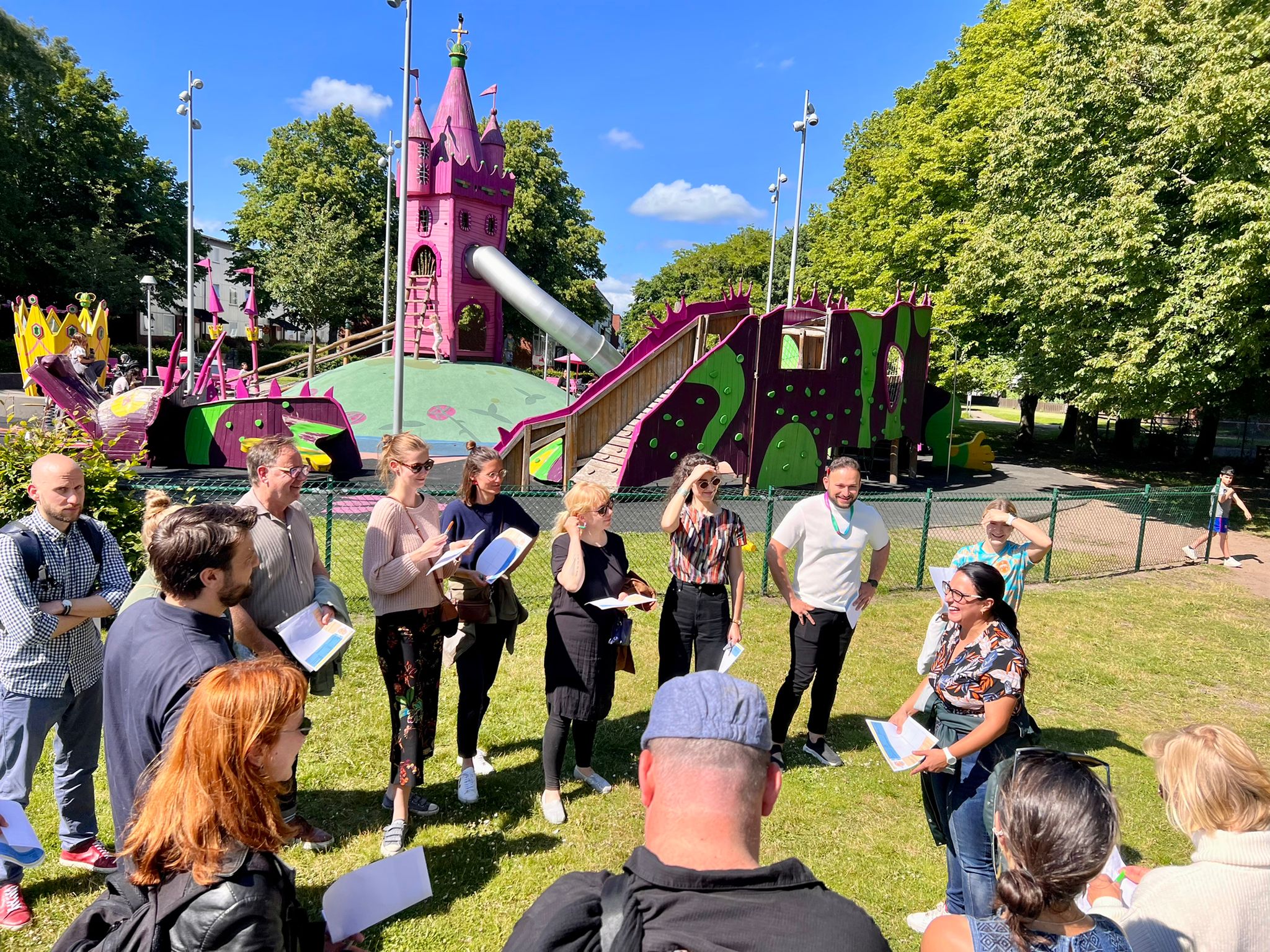 Cities where the future is decided: Helsingborg
Event
By Päivi Raivio 1 mes ago 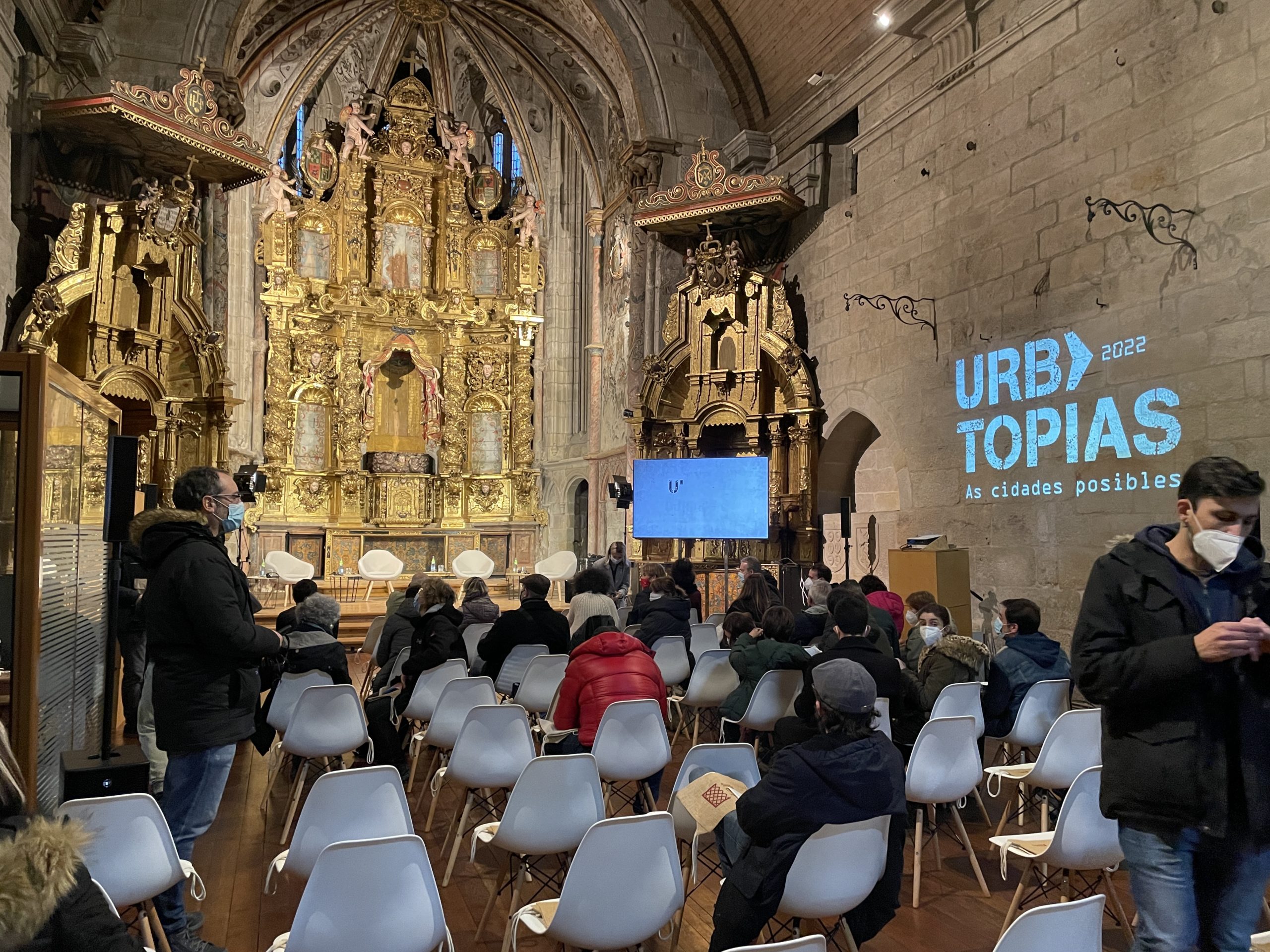 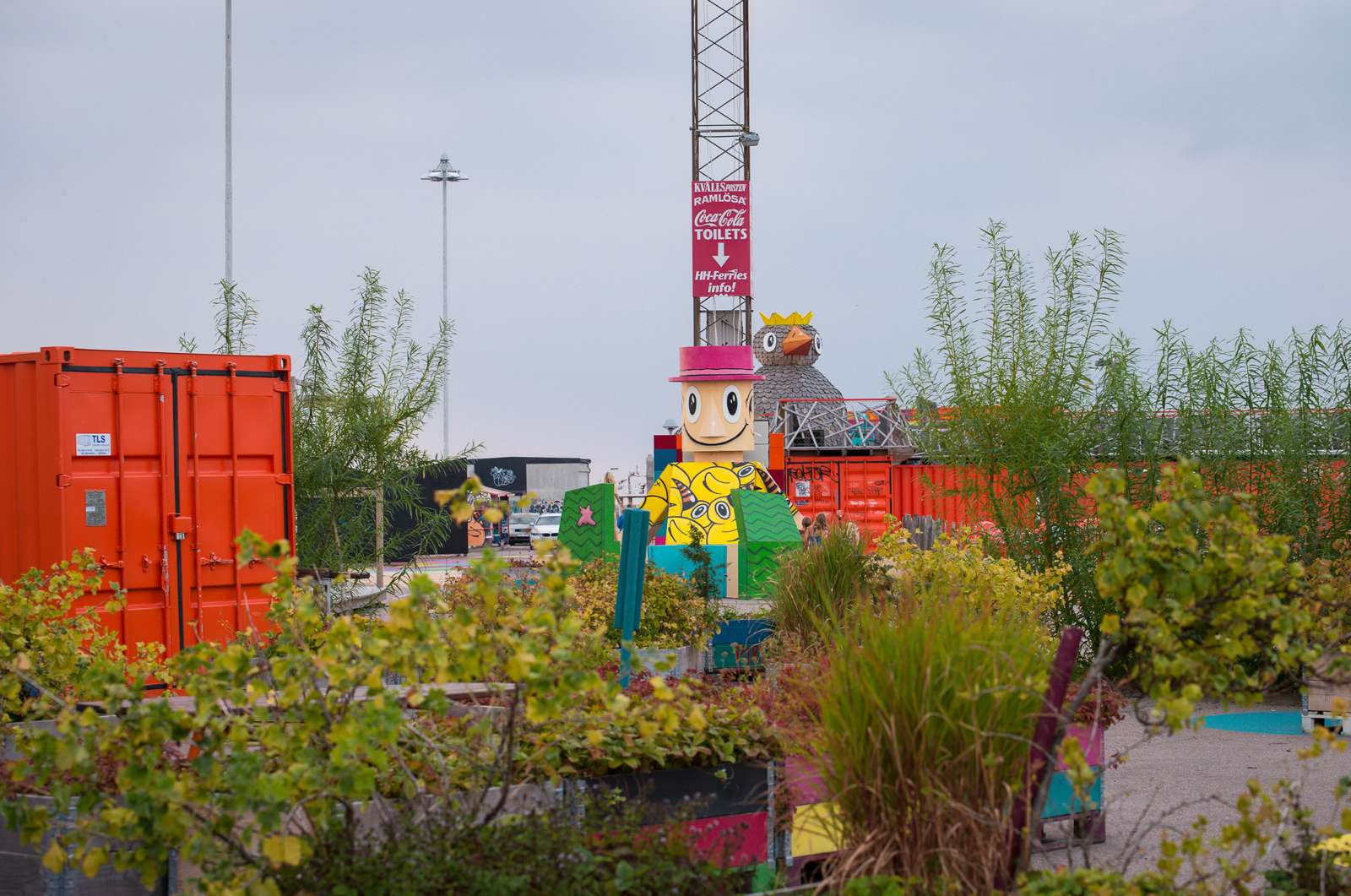 Placemaking as a city wide endeavour
Event
By Alice Bazzica 3 mesos ago
Do you like our content?
Sign up to our newsletter and receive the latest articles and news from AfterCovid.City in your inbox. We will keep it brief and specific, we dont like spam either. ; )
El nostre lloc no utilitza cookies ni emmagatzema informació de sessió. Tingueu en compte que la interacció amb alguns elements us redirigirà a plataformes de tercers i llocs que sí utilitzen cookies (per exemple, Instagram), de les quals no ens fem responsables. Si continueu utilitzant el nostre lloc, assumirem que esteu d'acord amb això