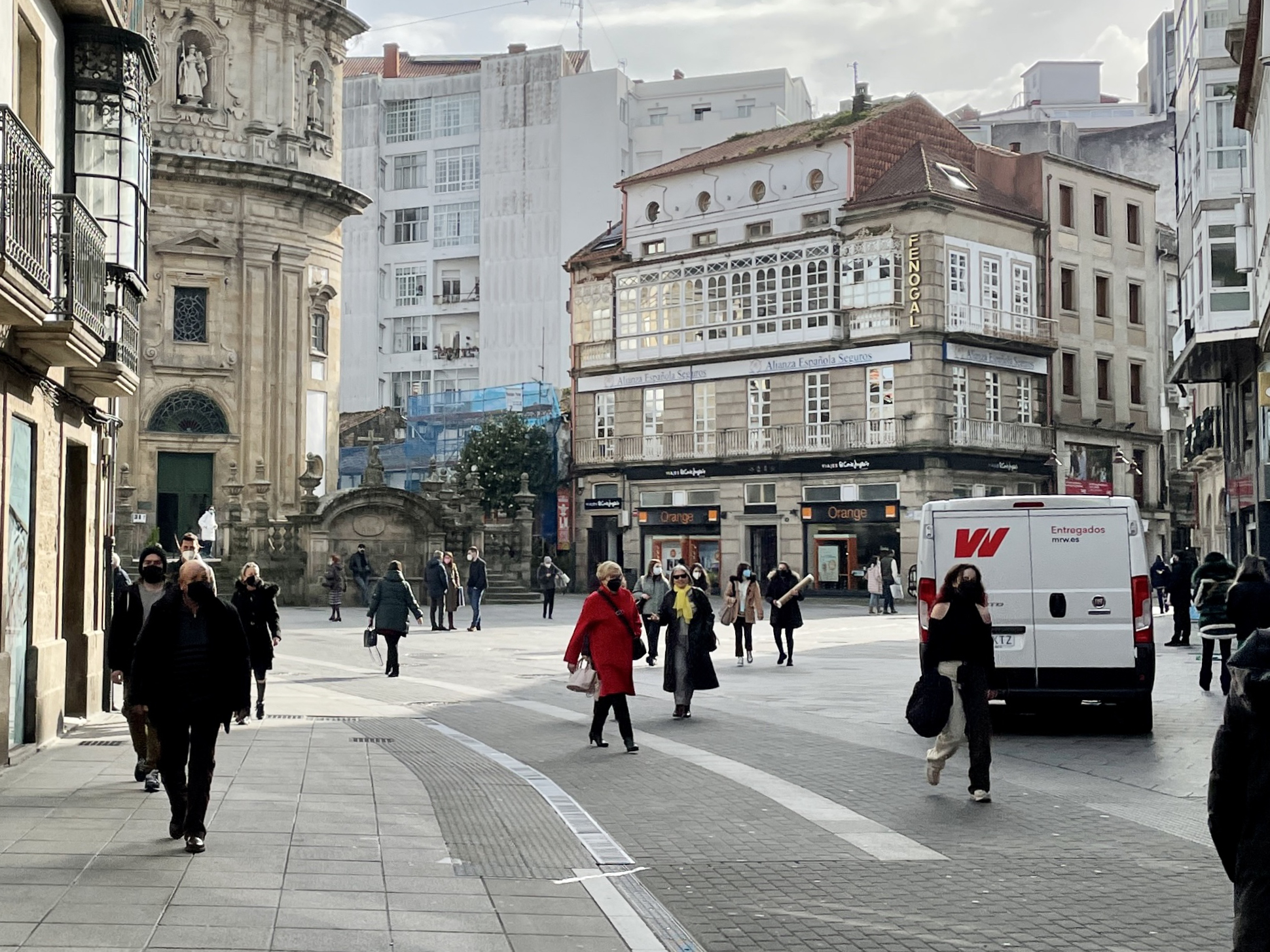 In February 2022, Placemaking Europe took a site visit to Pontevedra, hosted by The City of Pontevedra, in the pursuit to absorb the fantastic human-scale measures and collaborate towards Placemaking Week Europe 2022 taking place there this Sept 27 -30.

During our visit to Pontevedra, together with the city authorities, we, as the Placemaking Europe Team,  started to reflect on the themes of the #PlacemakingWeekEurope2022 . During our stay we went everywhere on foot. We learned  about the transformation that Ponteverda experienced over the last 20 years oriented around human-scale; witnessing   first-hand that a city can and should organise itself around pedestrians. Pontevedra implemented, and now maintains, many smart, and not necessarily expensive, traffic calming strategies. These included hardware (i.e. infrastructure solutions), orgware (e.g. coalitions, tools, policies) and software (e.g. usage, wayfinding, pedestrian flows, walking and driving experience) transformations.

For example, the city has intentionally and gradually made changes to the infrastructure in order to increase space for pedestrians, rather than cars. As the organisation of a street naturally depends on the specific contextual needs of its location – such as the available width –  some streets are designed for pedestrians only, while others may involve the coexistence of pedestrians and cars. 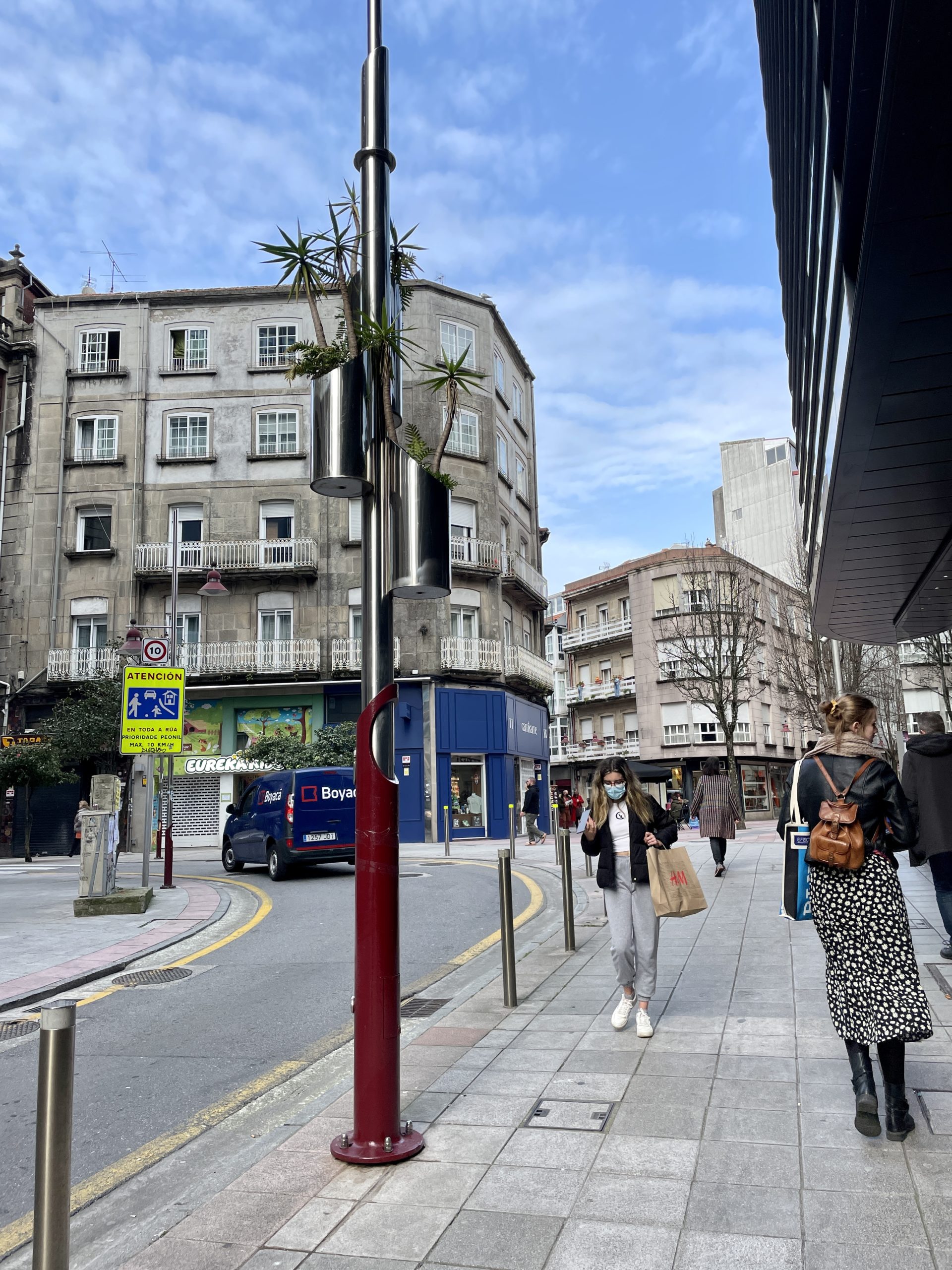 Motivating human-scale movement through the city (walking and cycling)  is made possible by smart urban design. As a starting point, the surface is smooth without obstacles and therefore makes it easier for people with reduced mobility, such as those with prams or the elderly, to move around. Interestingly, kerbs or posts, whether they amount to 10 cm or 50 cm, prevent cars or humans alike from entering the threshold. Using strategic placement and nudging mechanisms, pedestrians can be protected with street hardware; sculptures clearly separate and halt vehicles from entering the walkway zones and speed bumps slow traffic near pedestrian throughways. In alternative cities that continue to hail the car as a primary means of transport and as a priority in public space, poor sidewalk connectivity can impede pedestrians to traverse the city  or even speedbumps slow down transit near pedestrian throughways. 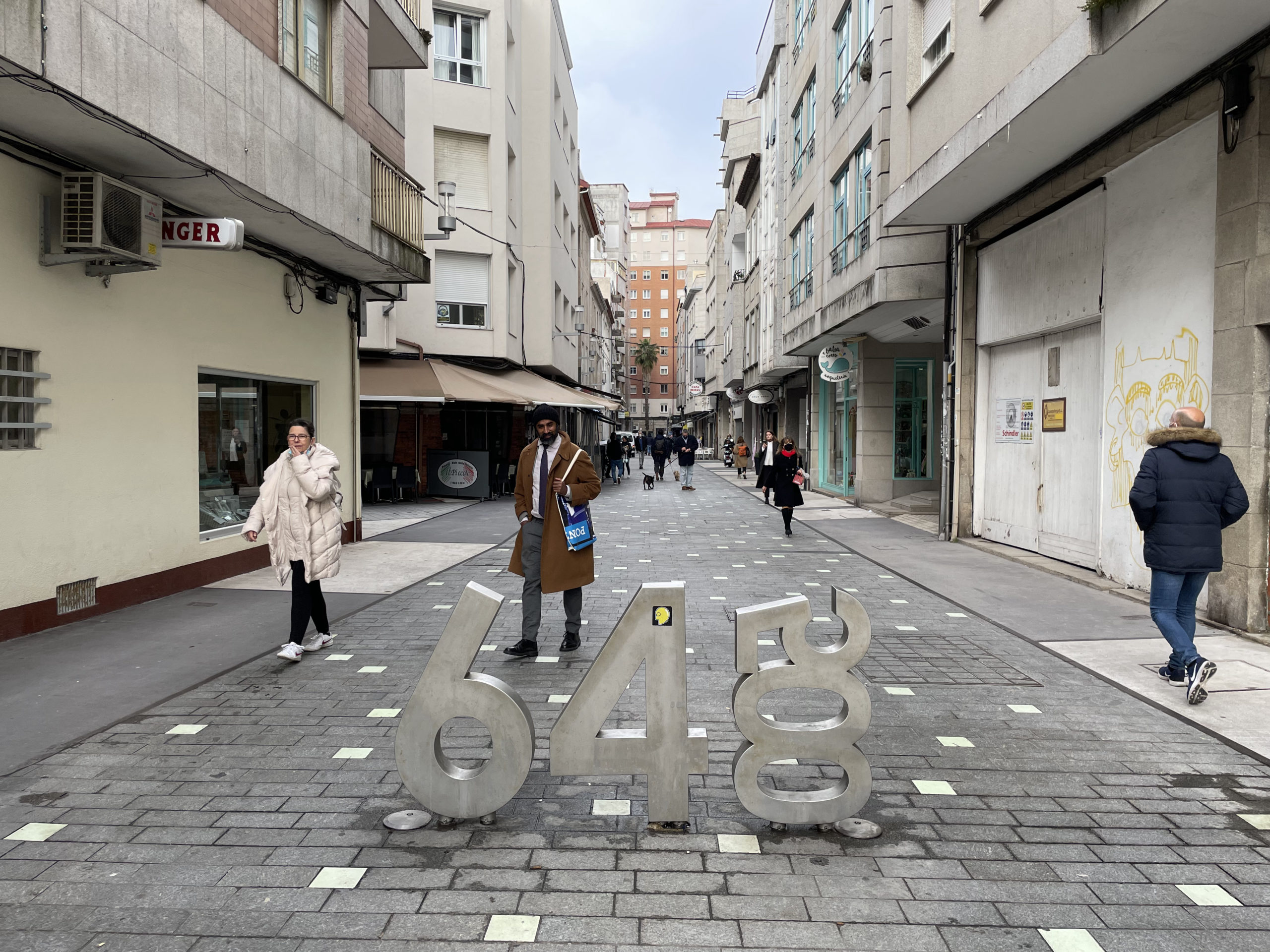 In contemporary planning, parking is organised according to the “park and walk” principle. Underground car parks are available to residents, while visitors can use them for a fee. Outside the city, free large car parks are organised – as a nudging strategy towards sustainable movement – to promote commuting by alternative means, namely, accessing the centre on foot. Importantly, parking in the centre is time limited, and mainly allocated for service vehicles – you can park there for 10 minutes to run an errand and then free up a space. From this policy action, we witnessed beautiful alleys and streets filled with public life, neighbourly chats, and passersby that slowed to windowshop and engage with their local economy.

In an effort to achieve zero fatalities due to road violence, a maximum speed of 30 km/h is allowed throughout the city as an integral traffic calming element of Pontevedra’s mobility policy. In the inner city, on the other hand, cars travel at 10 km/h and it feels like they are guests in the pedestrian space. As a result, the main roads allow for efficient emergency traffic – such as ambulance or fire trucks – and the inner city streets function for people, without even needing to build designated cycle lanes, as cyclists can feel safe riding on the streets. The city follows the motto: “Cars watch out for bikes; bikes watch out for pedestrians”. You can’t imagine how pleasant it is to walk around the city when you don’t have to be constantly alert to threatening cars. And how much easier it is to let children play in the street. 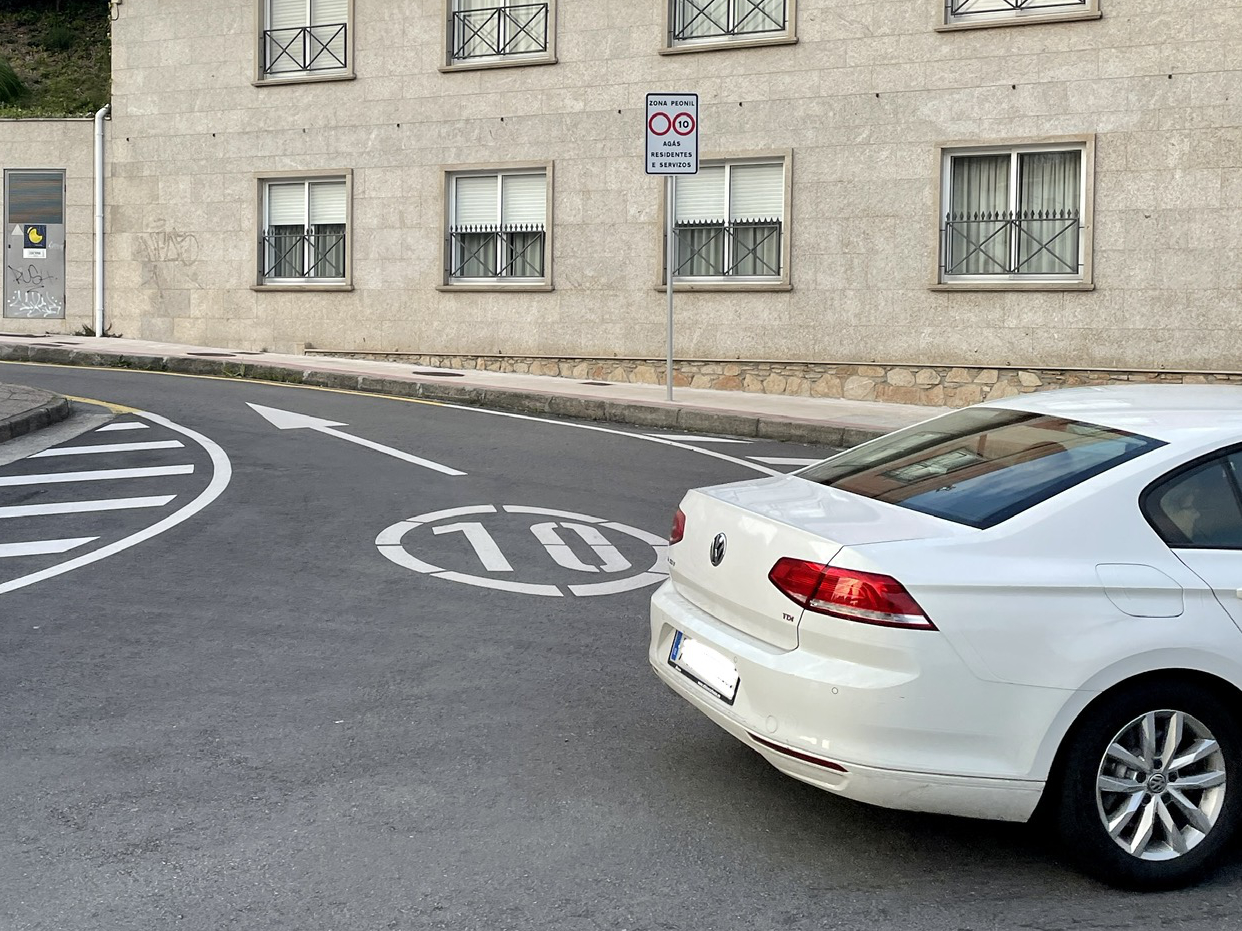 But does it all work? To answer that, one only has to look at the data. Fantastically, there have been zero fatalities within the transformed areas in the past decade. Prior to the transformation, unfortunately, 30 fatalities occurred between 1997 and 2006. The number of serious accidents resulting in permanent injuries also decreased drastically from 1999 2015: respectively from 69 to 4. In further support, CO2 emissions fell by 66% between 1999 and 2014.

Pontevedra's policy is not to get rid of cars, but to decide what is the ultimate goal. The priority for Pontevedra is the comfort and safety of its citizens. This requires bold decisions. Let’s follow their lead. 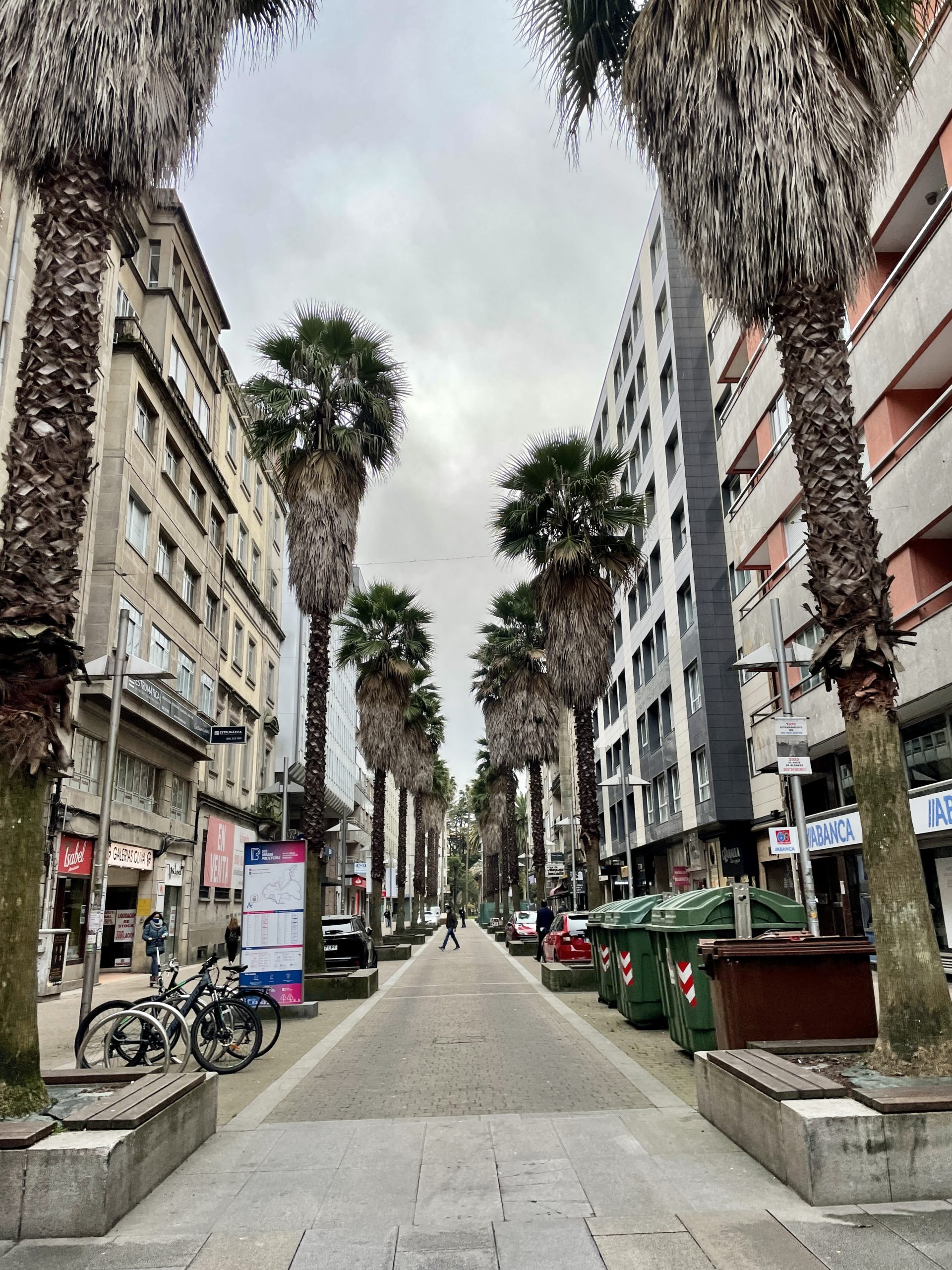 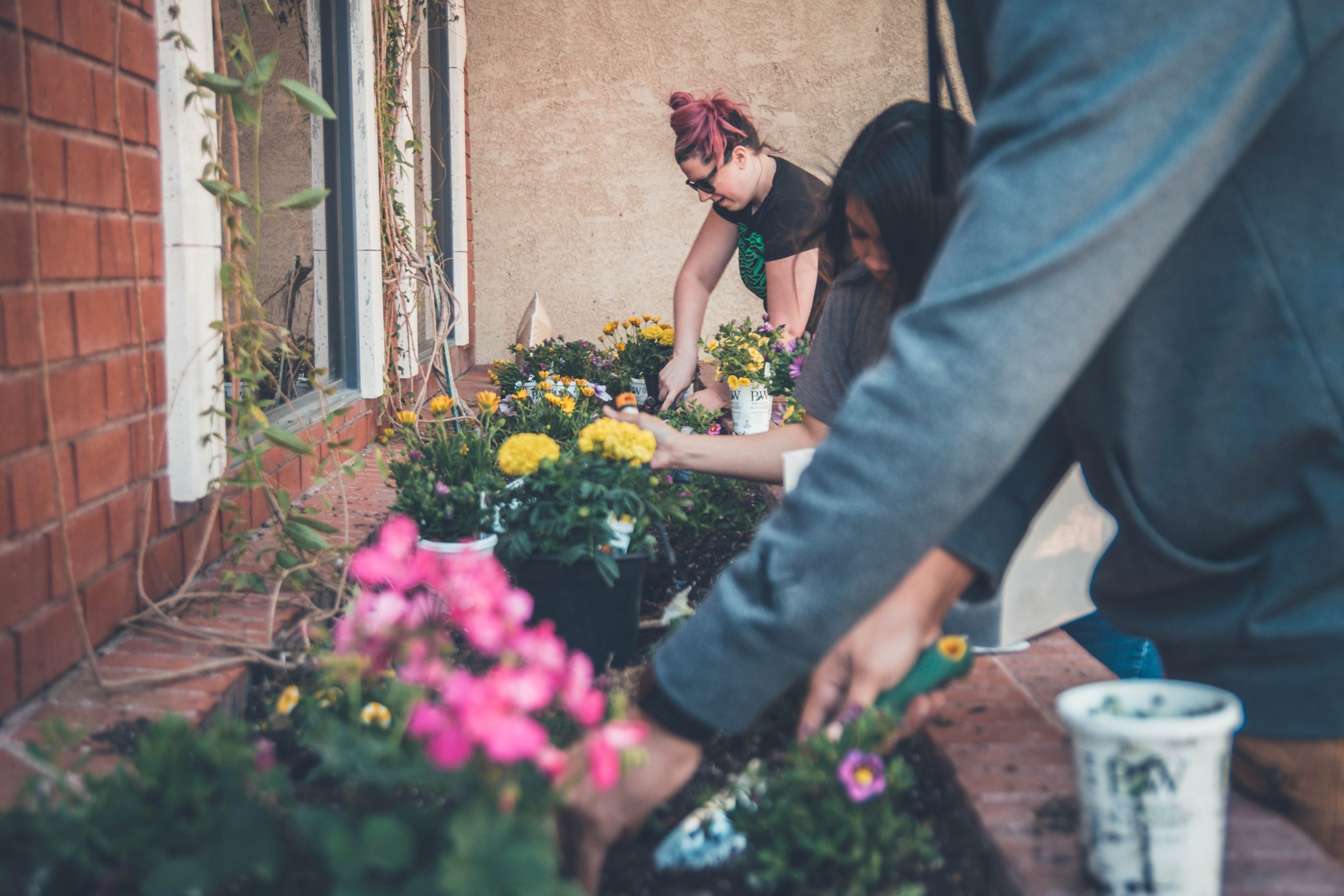 Urban Post-Pandemic lessons Towards a more Resilient Future
Public space
By Alice Bazzica 3 weeks ago
Do you like our content?
Sign up to our newsletter and receive the latest articles and news from AfterCovid.City in your inbox. We will keep it brief and specific, we dont like spam either. ; )
Our site does not use any cookies nor stores any session information. Please be aware interacting with some elements on the site will redirect to third-party platforms and sites that use cookies (e.g. Instagram), which we are not responsible for. By continuing using our site we’ll assume you’re OK with that